Kim Jones made his haute couture debut for Fendi on January 27 at the Palais Brongniart in Paris. Named Artistic Director of Women’s collections of the Roman house last September, the British designer is also head of Dior Men. Inspired by the writings of Virginia Woolf and timeless Italian codes, Kim Jones proposes a romantic vision of the Fendi woman.

The only surviving recording of writer Virginia Woolf is from a 1937 BBC radio broadcast series called Words Fail Me. Kim Jones chose her mysterious voice to open his first haute couture show for Fendi, setting the tone for the collection: “Words, English words, are full of echoes, of memories, of associations – naturally. They have been out and about, on people’s lips, in their houses, in the streets, in the fields, for so many centuries.”

Words infuse the collection, from love letters written by Virginia Woolf to her lover Vita Sackville-West, to her novel Orlando, inscribed on mother of pearl minaudières or leather boots. The set for the show also referenced the author in a glass labyrinth decorated with bookcases to create intimate “rooms of their own”. For his first haute couture show, Kim Jones surrounded himself with longtime friends including Demi Moore, Kate Moss and her daughter Lila, Naomi Campbell, Christy Turlington and Cara Delevingne. They took to the runway alongside androgynous models with carmine lips wearing long flowing capes to the sound of Max Richter’s soundtrack. In addition to literature, Kim Jones also found inspiration in the murals painted by Virginia Woolf’s sister Vanessa Bell at Charlheston Farmhouse, the regular meeting place of the Bloomsbury group to which they belonged. Her decorative motifs are embroidered on gowns. Another key theme of the collection is marble, mirrored on an imperial gown worn by Naomi Campbell. The marble palette is a tribute to the Galleria Borghese in Italy, a country adored by the Bloomsbury group, and above all the native land of the Fendi family. 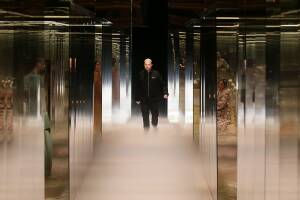 The history of Fendi provided a final and equally central inspiration for Kim Jones’ maiden haute couture collection. He paid tribute to Karl Lagerfeld, who shared his love of literature and was his predecessor at Fendi for over 50 years. The final Fendi monograms designed by Karl are beaded onto boots. The history of Fendi is that of the family that founded the Maison in 1925. Silvia Venturini Fendi is today Artistic Director for menswear and accessories, while jewelry designer Delfina Delettrez Fendi also walked the runway. As Kim Jones noted, “Fendi represents artisanal quality of the highest order, and it is all about family. It is in its third generation with a Fendi at its helm, and I am guest starring while bringing in the fourth.”