2022 LVMH Prize for Young Fashion Designers, 9th edition: LVMH announces the date of the 2022 final and the composition of the Jury - LVMH

Following the LVMH Prize semi-final that was held on 4th and 5th March, LVMH is pleased to announce that the final of the ninth edition of the LVMH Prize for Young Fashion Designers will take place on Thursday, 2nd June, 2022 at the Louis Vuitton Foundation.

During the final, the Jury will decide between the eight finalists and award the LVMH Prize and the Karl Lagerfeld Prize. The Jury, which includes Jonathan Anderson, Maria Grazia Chiuri, Nicolas Ghesquière, Kim Jones, Stella McCartney as well as Delphine Arnault, Jean-Paul Claverie and Sidney Toledano, will welcome two new members this year: Nigo, Artistic Director of Kenzo, and Silvia Venturini Fendi, Artistic Director of Fendi accessories and menswear.

Our social media will showcase the award ceremony and take the public behind the scenes.

The eight finalists are: 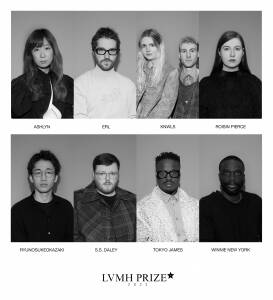 THE WINNERS OF THE PREVIOUS EDITIONS

Over the 25 years since the foundation of LVMH, the Houses in the Group have all been inspired by a passion for creativity and innovation while nourishing an exceptional heritage rooted in time- honored know-how. As Bernard Arnault explains: “Innovation is more powerful when it springs from a preserved heritage.”

In métiers as diverse as fashion, jewelry, perfumes, leather goods, winemaking or watches, LVMH brands and designers stand apart in their quest for excellence, and their unique passion for innovation, invention and creativity.

Because both its roots and future are intimately linked to creativity, LVMH and its brands have always actively nourished creative talent. Creativity is one of the Group’s core values, guiding all its teams, from designers to noses to cellar masters. This engagement inspires all LVMH houses to actively support creativity in every form. For that reason, the Louis Vuitton Foundation for contemporary art opened to the public in October 2014 in a sumptuous building created by Frank Gehry, adding to LVMH’s lasting sponsorship of the arts.

Motivated by this “passion for creativity”, LVMH has for many years supported the world of fashion globally through corporate philanthropic initiatives, including:

This same passion has led the LVMH Group to launch the LVMH Prize for Young Fashion Designers. This initiative helps drive the momentum and emergence of fresh talent that is essential to the vitality and diversity of the fashion ecosystem, a role that is perfectly in phase with the responsibilities of the world leader in luxury.