Inspired by Hayao Miyazaki’s film masterpiece My Neighbor Totoro, the latest capsule collection from Loewe celebrates the love of craft shared by the celebrated Spanish luxury house and Studio Ghibli. The protagonists of the cult 1988 Japanese animated movie come to life on clothes, bags and accessories in a truly magical creative encounter.

Studio Ghibli was a natural choice for Loewe’s latest collaboration given their mutual love of artisanal techniques. Created in 1985 by Hayao Miyazaki, Isao Takahata and Toshio Suzuki, the Tokyo based Japanese production studio has produced a host of hugely successful award-winning films, including Princess Mononoke, Spirited Away and Howl’s Moving Castle. The characters and images in the film have become timeless icons marked by poetic animation, fantastical adventures, environmental message and magnificent soundtracks. For Loewe Creative Director Jonathan Anderson, My Neighbor Totoro is the ultimate in heartwarming entertainment. The designer finds the friendship of the young heroines with the king of the forest, the magical Totoro and his mischievous susuwatari dust bunnies who can’t be seen by adults especially touching. 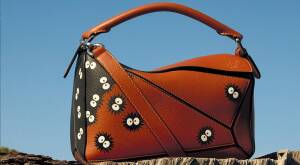 Nature and the importance of protecting it by living in harmony with the environment figure at the center of the LOEWE x My Neighbor Totoro collaboration. This mutual connection with nature is captured in the campaign images created with photographer Gray Sorrenty. The models play a game of a hide and seek in magical looking woods, fused with images of Totoro, the Studio Ghibli mascot. The gentle creature’s silhouette is transported on loose t-shirts, vibrantly colored hoodies, oversized shirts and hand-painted leather jackets. Characters from the animated film come to life on leather accessories such as wallets and pouches, plus the iconic LOEWE Puzzle, Balloon and Hammock bags. Tote bags are embellished with a tapestry technique, drawing on meticulous craftsmanship to recreate the world of My Neighbor Totoro. Studio Ghibli’s original drawings are interpreted for this collaboration with Loewe as prints, leather marquetry and jacquard intarsia, giving the collection a timeless and mythic feel.

“The message is one of dreamy serenity and hands-on creativity – of being at one with nature and with one’s own inner child,” says Jonathan Anderson. “This is especially important right now and, I think, always will be,” adds the designer. The LOEWE x My Neighbor Totoro collection is available in a limited edition at Loewe points of sale worldwide, including Le Bon Marché in Paris.