Following the opulent Paris show, Louis Vuitton continued its story in Shanghai with Act 2. The curtain came up for the Women’s Spring-Summer 2022 Collection at the Shipyard Repair Docks on the Huangpu river, a waterway symbolic of travel that resonates perfectly with the Maison. Looks presented in Paris were joined by nineteen more designed exclusively for the Shanghai Spin-Off.

Guests were invited to “Le Grand Bal of Time” as ceremony, intrigue, whispering and sensual attraction came to life under the captivating light of chandeliers. Nicolas Ghesquière drew inspiration from the figure of a vampire after his participation in the series Irma Vep  by Olivier Assayas, for which he designed costumes for Alicia Vikander. The Maison’s Artistic Director for Women’s Collections proposed a wardrobe with a couture approach that melds inspirations from different eras, creating a fusion of generations.

Nineteen pieces designed exclusively for the Shanghai Spin-Off added to the wardrobe unveiled for the Paris collection. Four of them display the iconic motif featured on the Loop bag, one of three exclusive bags created for Shanghai. The trio is completed by a Dauphine and a Petite Malle, both in laser-cut leather. 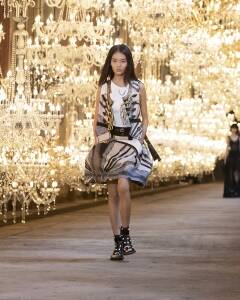 Louis Vuitton’s core values of timelessness and transmission both figure at the heart of this new episode. Nineteenth-century beads come together with jeans from the 1990s, while bombers are paired with corsets and embroidered dresses are inspired by the 1920s, creating a reappropriated wardrobe. The light, ethereal Ellipse crinoline dresses evoke Louis Vuitton’s debuts, a tribute to the 200th anniversary of the founder’s birth.