LVMH is taking part in the Biennale Internationale des Métiers d’Art et Création, Révélations, fine crafts show, which runs until June 12 at the temporary Grand Palais in Paris. The Group is presenting “Conversations Ex Situ”, an artistic collaboration between visual artist Jérémy Gobé and five female artisans from La Fabrique NOMADE, created with support from the Métiers d’Excellence LVMH program. This is a major showcase for the work, which has previously been exhibited at the FIAC contemporary art fair (October 2021) and at HOMO FABER in Venice (April 2022).

During the event, LVMH hosted a round table on “Art and Craft: United to Preserve the Essential”, with Alexandre Boquel, Director of Métiers d’Excellence LVMH, Inès Mesmar, Director of La Fabrique NOMADE, and Jérémy Gobé, artist and founder of Corail Artefact. Their discussions spotlighted the importance of strong and active commitments to preserving things that are essential to humanity, notably biodiversity and unique savoir-faire by passing it on to new generations. 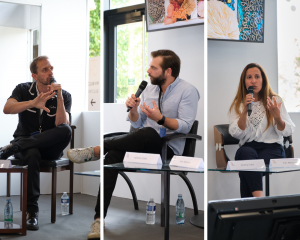 “One thing that is difficult to express in words is craft know-how, because it is embodied by people whose skills are an integral part of their being. In a world where things are increasingly passed on in digital form, and where people meet face-to-face less frequently, we are delighted to have an event such as Révélations that brings us together around the magic of creativity and craft.”  Alexandre Boquel, Director of Métiers d’Excellence LVMH.

In science, “ex situ” designates a development of biological material away from its native habitat with the aim of conserving it to ensure its survival. Coral, which figures prominently in the work of Jérémy Gobé, is a true totem of biodiversity resilience, a builder animal and an essential producer of oxygen that is as fragile as the world’s craft savoir-faire, which migrates from country to country and evolves with this same conservation instinct.

This is why “Conversations Ex Situ”, an individual creation that is part of an ensemble, comprises five works that retrace the history behind this collaboration, along with a personal account by the artisans who embellished this book with their expertise: Anna-Karina Raga (jeweler), Faten Al Ali (ceramicist), Fiorella Gonzalez (crochetier), Ghazaleh Esmailpour Qouchani (jeweler) and Serap Karabulut (embroiderer). Natives of five different countries, their savoir-faire have been unified to create a coral reef, illustrating Jérémy Gobé’s commitment to preserving biodiversity.

This commitment is shared by the LVMH Group, which in 2021 presented its new environmental roadmap, LIFE 360. This strategy sets out  ambitious objectives with three key milestones – 2023, 2026 and 2030 – around four pillars: creative circularity, traceability, biodiversity and climate.

LVMH has supported La Fabrique NOMADE since 2019. This commitment resonates with the Group’s longstanding commitments to preserving and passing on unique savoir-faire in craft métiers and to promoting equal opportunity.

Created in 2016 by Inès Mesmar, La Fabrique NOMADE helps talented refugee artisans practice their craft in France by producing collections created through collaborations between the artisans and volunteer designers and stylists.