The first edition of LVMH Climate Week, an online event for all LVMH Group  employees worldwide, took place from December 8-11. The groundbreaking program boosted awareness among teams across the planet of the growing role LVMH is playing in fighting climate change and mitigating the environmental impact of business activities. The agenda spanned 12 focus sessions featuring special guests, including creative directors, senior LVMH executives and members of different LVMH Maisons. LVMH Climate Week culminated with a focus on the retail teams at LVMH Maisons and their forward-facing solutions to improve the environmental performance of their stores.

The LVMH Environmental Development department has been supporting the Group’s Maisons for the past 25 years to help them reduce their carbon footprint with a wide range of initiatives.

Lighting is one of the main sources of LVMH’s groupwide energy consumption, and some 70% of its greenhouse gas emissions come from its stores. This makes installation of LED lighting the primary source of progress, since LED systems reduce energy consumption by 30% on average compared with conventional lights, while at the same time improving both the quality and reliability of the lighting. Each year LVMH Maisons increase the number of square meters fitted with LED lighting in their stores, supported by the Group’s internal carbon fund and the LVMH Lighting program. The program includes a suite of services for Maisons – training for architects, certification of innovative solutions suppliers, organization of task forces and more – and is a pillar of the LIFE in Stores program. In addition to lighting, it aids LVMH Maisons in identifying other paths to environmental performance improvement such as better insulation, air-conditioning and heating, internal air quality, worksite management and ecodesign. 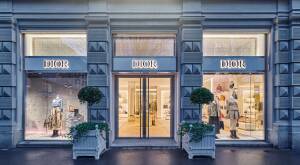 Boosting the energy performance of retail spaces has long been a priority for LVMH, leading to the creation of the LIFE in Stores Awards in 2016. These awards go beyond simple recognition for winners by creating a template for continuous progress and a source of inspiration for all Maisons.

LVMH Climate Week came to a close with the LIFE in Stores Awards, which recognize the top initiatives that create a virtuous circle of progress and drive innovation to elevate the environmental performance of the Group’s stores. The awards, which are now certified by an independent third-party auditor, were presented to seven winners:

“By co-creating solutions and encouraging their widespread adoption we can achieve real progress. Our teams have once again shown that they are eager to be involved and above all, that they are ready to take concrete actions. In a Group such as ours you don’t have experts on one side and business as usual on the other. Sustainability is everywhere, and we all own the solutions to these challenges,” noted Hélène Valade, LVMH Environmental Development Director.

To watch the replay of the LVMH Climate Week conferences, click here.