LVMH, partners with ELLE on Prix des Artisanes for the second year in a row - LVMH

Following the success of the first edition of the Prix des Artisanes in 2021, magazines ELLE, ELLE à Table, ELLE Décoration and the LVMH group, in association with the Institut National des Métiers d’Art and the Artisans d’Avenir network, are delighted to announce the launch of the second edition of the prize. This competition was created to promote the remarkable savoir-faire of craftswomen in applied arts and other uniquely skilled métiers spanning the fields of Fashion, Design & Fine Tableware, Preservation of the French Heritage and Winemaking.

Feather worker, ceramicist, winemaker, glass blower or crystal cutter are a few examples of exceptional yet often little-known métiers. LVMH’s support for the Prix des Artisanes echoes the Group and Maisons’ commitments in favor of gender equality, and in passing on exceptional know-how. As heirs and custodians of the unique cultural heritage embodied by craft and creative métiers, more than 80,000 LVMH talents champion each day the 280 different Métiers d’Excellence practiced throughout the Group and actively preserve and develop savoir-faire that sometimes dates back centuries.

To apply for the Prix des Artisanes, candidates must meet the following criteria:

Artisans are invited to submit their applications online on the dedicated space on elle.fr’s website, until September 4, 2022.

Finalists will be selected in each of the four categories and present their work to a prestigious jury comprising: 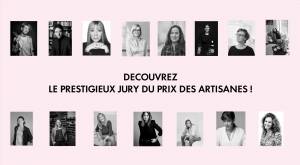 Winners will receive media coverage of their careers and work in Elle Group magazines, as well as personalized support to drive the development of their workshop and/or business.