The Solaire Culture exhibition opened on June 16th, 2022, at the Jing in Tokyo. It shines a light on Veuve Clicquot’s 250 years of legacy, savoir-faire, and culture.  The exhibition also displays some outstanding gems: a portrait of Madame Clicquot reinterpreted by world-renowned artist Yayoi Kusama, 20 remarkable historical documents including a letter signed by Madame Clicquot and an original bottle of Veuve Clicquot from the 1840s—an epic discovery in the Baltic Sea following a shipwreck. 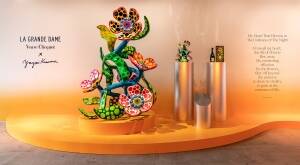 Based on a long tradition of innovation and creativity, the Maison has established a dialogue between its legacy and the resolutely contemporary vision of Camille Morineau, and Constance Guisset. Conceived as an experience, and appealing to all the senses, this journey into two-and-a-half centuries of “Clicquot Culture” celebrates creativity, optimism, and boldness, arriving in the present day with striking contemporary artworks specially commissioned for the exhibition.

“This exhibition is an unprecedented event for Veuve Clicquot and the symbol of our capacity to dream big and constantly innovate. Starting in Japan, a key market for the House and the Land of the Rising Sun, this exhibition will highlight the House’s know-how, typical of Champagne winemakers, the life of Madame Clicquot, and the many works produced for Veuve Clicquot in the 20th century by artists.” Jean-Marc Gallot, President & CEO of Veuve Clicquot.

Solaire Culture is also a 100% feminine exhibition. To express Veuve Clicquot’s heritage in a contemporary form, and as a tribute to Madame Clicquot’s audacity, Camille Morineau brought 10 bold and renowned female artists together for the first time, including the iconic Yayoi Kusama and manga artist Moyoco Anno, but also Inès Longevial, Tacita Dean, Cece Philips, Rosie McGuinness, Pénélope Bagieu, Olimpia Zagnoli, Sheila Hicks and Monique Frydman. Each one was given carte blanche and delivered an original artwork inspired by Madame Clicquot and her inventions, which have revolutionized the world of champagne. 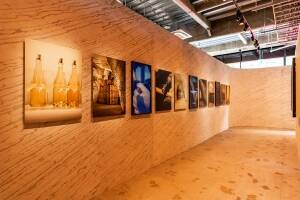 “Madame Clicquot showed us the way; guided by her, the Maison is committed to supporting bold and creative women who forge a path for generations to come.” Carole Bildé, Chief Marketing and Communications Officer.  Indeed, in 1805, Madame Clicquot took the reins of the Maison and became one of the first businesswomen of modern times. Breaking through the barriers for women of her era, she became known as la grande dame de la Champagne.

Her free spirit, her boldness, and her profound optimism have continued to inspire the Maison, and, through its global footprint, to radiate throughout the world: this is Solaire Culture.