International Day of Education: LVMH and its Maisons continue to support inclusive and equitable education - LVMH

In conjunction with this year’s International Day of Education proclaimed by the United Nations, the LVMH Group is proud of the priority placed on education as part of the social responsibility commitments pursued by the Group and its Maisons.

Around the world, LVMH supports initiatives to facilitate access to higher education for all students, regardless of their family, social or cultural background.

The INSIDE LVMH program launched in six countries in Europe is open to over 45 schools and universities. The program enables students from partner schools and interns at LVMH Maisons to deepen their understanding of the many job and career opportunities available in the luxury industry. LVMH managers share insights with the students in exclusive videos, guiding them on an immersion into five essential skillsets across the LVMH Group: Design and Creation, Brand Management, Supply Chain and Manufacturing, Digital Transformation & Entrepreneurship, and Client Excellence.

In Europe, the Institut des Métiers d’Excellence LVMH is a vocational training program with a work/study format that allows LVMH to pass on its unique expertise in craft, creative and retail professions to new generations, enhancing their employability. Since the creation of the IME in 2014, more than 900 apprentices have joined the program in France, Switzerland, Italy and Spain in partnership with leading schools in their respective disciplines.

In France, in 2020, LVMH also continued its partnership with the cities of Clichy-sous-Bois and Montfermeil, two Paris suburbs with young and diverse populations. Inspired by a shared commitment to excellence, this partnership facilitates inclusion of youth from underserved neighborhoods and helps build cohesion. Initiatives include “discovery internships” for 108 middle school students in 2020, tours of LVMH Maisons, job search support and more. Last year, the annual vocational fair presenting work/study opportunities proposed by the Institut des Métiers d’Excellence took place in Clichy-sous-Bois in February like the previous years, drawing over 1,000 visitors.

In addition, LVMH sponsors the Cultures and Creation fashion show in Montfermeil, providing a showcase for local creative talents. Ahead of the show, the Group provides training for young participants through master classes, and organizes meetings with designers and artisans. As part of the event, the LVMH CSR Young Talent prize enables young people with a passion for design but little opportunity to engage with the world of fashion, to see their talent recognized. Several of them have since joined LVMH Maisons through work/study programs, taking classes at the École de la Chambre Syndicale de la Couture Parisienne. The winner of the 2013 prize was hired by the Christian Dior Haute Couture atelier.

The LVMH Group engages with students in the United States as well, including students from underserved communities in New York and Miami. Live Chat sessions between young people and LVMH staff offer a chance to talk about career opportunities. In 2020 over 2,500 young people took part in 20 sessions. Five of the sessions were organized in partnership with the nonprofits United Way of NYC and Honey Shine, which help keep at-risk students on track with their educational goals, especially those whose families have also been impacted by the COVID-19 pandemic.

Aligned with the Group’s vision, LVMH Maisons have forged numerous partnerships with schools near their sites or in other regions.

Bvlgari has provided support for the charity Save the Children since 2009. Save the Children brings hope to children living in vulnerable conditions around the world, primarily by giving them access to education. During the past 12 years, more than 1.5 million young people have been empowered to build a better future. Since its launch, the partnership has raised nearly 80 million euros and 300 personalities have donated support for its different initiatives.

Created in 2017, the Women@Dior mentoring program has continually expanded its scope as it guides young women in the first steps of their careers. The program is designed to inspire students at partner schools and universities of Dior and the LVMH Group thanks to support from mentors at the famed couture house. In 2017, Women@Dior counted 60 mentees from seven countries. In 2020 the program had grown to 400 mentees from 13 countries and expanded with the launch of the new Women Leadership & Sustainability online learning platform, open to 500 students around the world. 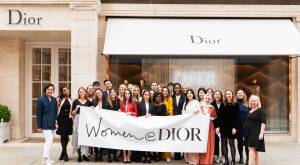 In the United States, the Hennessy Fellows Program awards curated corporate development experiences and financial assistance to selected high-achieving graduate students from Historically Black Colleges and Universities (HBCUs) and Predominantly Black Institutions (PBIs). The program is designed to identify, cultivate and move students into the corporate leadership roles of tomorrow. Hennessy, in partnership with the Thurgood Marshall College Fund, will offer an unprecedented level of resources to ensure students graduate with the core business competencies required for career success in corporate leadership roles. 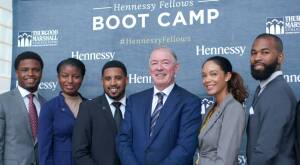